Ok, ferns do not have any flowers and they may appear quite stark… Nevertheless they are also quite diverse and interesting to study. Their reproductive cycle is at first sight very particular (see http://sciencelearn.org.nz/Contexts/Ferns/Sci-Media/Animations-and-Interactives/Fern-life-cycle ). But one can find some correspondances with the life cycle of other terrestrial plants.

Here are a few specimens seen in the Loire valley (the higher part, not the one with the well known wines), three from the Aslpenium genus: 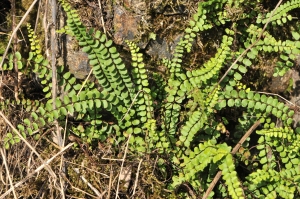 Asplenium septentrionale; note the leaves, almost non divided, and the spores under the leaves

Asplenium foreziense; named from the « Forez » region (near Saint-Etienne) where it was described, and where I took these pictures. But this species can be found elsewhere in Europe. You can see the spores on the second view.

A view on the typical development of the leaves of another fern species (Pteridium aquilinum): at the beginning of their growth they are rolled up.

The Loire Valley where these species were observed 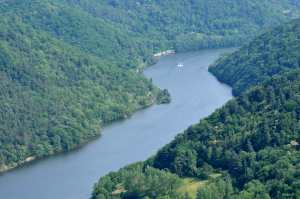 Ferns where more abondant in the terrestrial ecosystems a long time ago at the Carboniferous era, around 359 – 299 millions years ago. And here is a fossil fern, found not so far from the living ones above: 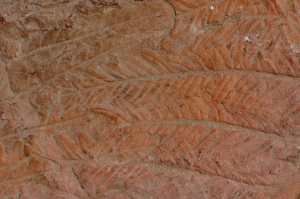 So ok flowering plants are much more diversified and colorful, but do not forget that the ferns where there first!

By the way here is a recent finding on the discovery (in fact re-discovery) of one of the first flowering plants, which is 130-124 millions years old and which lived in water: